The Partners of Neighborhood Stabilization

By Miriam Axel-Lute, associate director of the National Housing Institute and editor of Shelterforce, 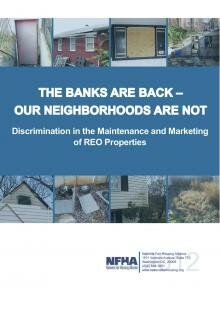 This post is part of an ongoing series based on the National Fair Housing Alliance report, “The Banks Are Back, Our Neighborhoods Are Not,” that examines ongoing discrimination in the marketing and maintenance of bank-owned foreclosed properties.

This series is also posted on Shelterforce.org’s blog Rooflines.

The recent report from the National Fair Housing Alliance on the differing maintenance standards of REO property in communities of color versus white communities put another set of statistics on the pattern that most of us have been seeing from the beginning of the housing collapse: It is hitting some neighborhoods harder than others. And some, it is devastating.

As larger private investors are moving in to purchase pools of non-performing loans and REO, the pattern could repeat itself.

As George Ostendorf describes in the latest issue of Shelterforce, pools of thousands of delinquent mortgages already change hands regularly. The mission of those trading them, however, does not include neighborhood stabilization and they are rarely aware of the nonprofit community’s work and challenges.

Even those who would want to do right by those neighborhoods are constrained by the expectations of their investors. “We’re in a hurry,” says one. “We have to return money in two to three years after we get it. We had to turn down two families we thought we could modify. It took too long and we had to turn them down and foreclose. They both got their jobs back, but we couldn’t wait any more.”

REO bulk purchases are heating up and likely to be a similar story. A February 1 Bloomberg story that reports “Private equity firms are jumping into distressed housing as the U.S. government plans to market 200,000 foreclosed homes as rentals to speed up the economic recovery,” describes firms putting together funds of $450 million (Oaktree Capital Management and Carrington Holding Co.) to $1 billion (Waypoint and GI Partners) for REO purchases.

Once these large players enter the market with funds and a rehab and rental or lease purchase strategy, what then? All indications are that lenders will force them to accept some low-value properties as part of the pools they purchase. Some of these may be truly worthless, and their proper destination a land bank, with or without demolition.

Other properties are in between, however, much as with notes—they could be viable, given some specific market knowledge, local connections, and access to some subsidy and/or patient or below-market capital, but the private equity firms are not likely to know what to do with them.

Could neighborhood stabilization organizations act as partners to receive those properties the private equity funds don’t want and might otherwise flip or walk away from? This could solve a headache on both sides. Nonprofits have struggled with access to properties in their areas at scale. Private investors who buy large pools have to figure out what to do with the lower value properties without causing collateral damage. Nonprofits should not open themselves up to being used as private equity’s “trash can” for the real junk, but there could be a subset where a transaction could generate real value for both sides.

It’s nice to say in theory that those partnerships are possible, but it’s not often that a nonprofit housing developer sits down with a hedge fund manager, or someone from an investment bank who is outside of the philanthropic or CRA departments.

But in 2010, the National Housing Institute, Shelterforce’s publisher, decided maybe that ought to change. We held two fishbowl discussions that brought together players from capital markets with nonprofit housing professionals and people from the public sector. Our goals were to make introductions between people who didn’t usually interact with each other, but were working in the same space, and to give them a forum to educate each other and explore ways in which they might collaborate to bring more scale to neighborhood stabilization work by having focused, solution-oriented discussions about specific aspects of the ongoing crisis.

We were making a bit of a leap of faith in doing this. Nonprofit housing groups don’t tend to think of something like a private equity firm as anything other than an outside force that is at best ignorant of and at worst predatory upon the neighborhoods they care about. Private capital markets players, as we learned, see nonprofits as basically well intentioned, but far too slow and tied up in red tape to be potential partners, and they are skeptical about whether they can make hard-nosed business decisions and property valuations.

Turns out, we needn’t have worried. At the close of the first discussion, which had been intended as a trial run before a conference that would run on the same format, the energy was palpable as people encouraged us to host another conversation of the same kind and size instead of a conference, while others talked excitedly about potential partnerships, some of which went on to materialize.

At the second fishbowl, which was focused on distressed mortgage note purchases, we had to turn people away to keep the size manageable, and once we got going participants put away their BlackBerries, leaned close, jumped in, and collared each other afterward to talk about putting some of the ideas raised into practice. Some went on to form lasting partnerships or launch or refine exciting projects.

The discussions changed the way many of the participants thought about the relationships between nonprofits and private sector players, as well. It became clear that in today’s climate, nonprofits have a number of strengths they can bring to the table. Two in particular come up over and over:

In general, we heard, and continue to hear, that these strengths could make nonprofits promising partners for developing exit strategies for the lower-value, unwanted portions of portfolios that private firms purchase and would have written off as completely worthless. Nonprofits, with a business orientation, can “add value to zero,” as one investor said in the first fishbowl.

It should be very clear that no property owners should get to evade the fair housing obligations that come with their by off-loading certain properties they don’t want to deal with onto nonprofits. But if the community development world can come to these partnerships as equals who, given the proper resources, can assist investors and lenders in fulfilling those obligations, then that will be a win for communities.

The latest issue of Shelterforce explores a number of the pieces that would need to be addressed to generate partnerships between capital markets and neighborhood stabilization, and profiles promising programs that are taking the first steps.

We invite you to join the conversation about how these partnerships can and should work, and how they might be shaped to further fair housing goals.

Select a date Select a category Search with Google

The Race-Talk is managed and moderated by the staff at the Kirwan Institute for the Study of Race and Ethnicity and is open to all respectful participants. The opinions posted here do not necessarily represent the views of the Kirwan Institute or the Ohio State University.

Our goal is to revolutionize thought, communication and activism related to race, gender and equality. Race-Talk has recruited more than 30 extraordinary authors, advocates, social justice leaders, journalists and researchers who graciously volunteered their expertise, their passion and time to deliberately discuss race, gender and equity issues in the US and globally.